Monkey Queen is a two player game, played on a 12x12 checkboard.  The board is initially set up with two queens - one stack of 20 ivory colored checkers and another of cigar as shown in Figure 1.

For convenience, some of the checkers can be kept off the board initially, and added to the stacks during play as needed.  If you only have 12 checkers of each color, you can start with them and augment the stacks with eight captured checkers each during play. 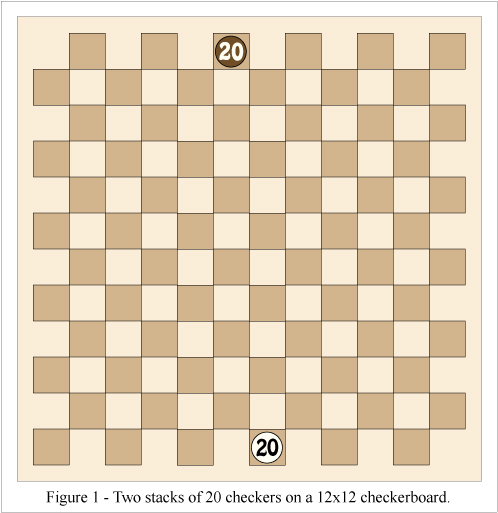 PLAY: The two players, Ivory and Cigar, take turns moving stacks of their own color (including singletons - stacks of height one), one stack per turn, starting with Ivory.  Players will always have a move available and must make one.

OBJECT OF THE GAME: Kill the enemy queen, or deprive your opponent of moves.  See the Object of the Game section below.

The pie rule is used in Monkey Queen.  Black has the option of claiming White's first move as his own, swapping colors.

More advanced players may wish to start the game with stacks of 20 or more checkers.  A handicap can be applied by giving the weaker player more checkers than the stronger.

In Figure 2, Ivory has one queen (a stack of seven ivory checkers) and one baby (singleton).  Cigar has one queen and two babies. 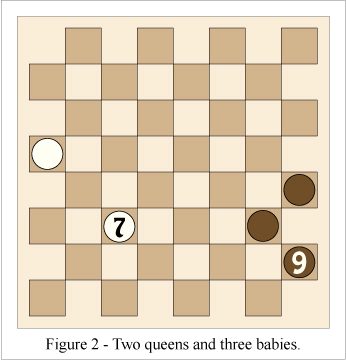 CAPTURING QUEEN MOVES - A monkey queen captures exactly like a Chess queen.  Slide the entire stack in any direction (horizontally, vertically or diagonally) along a straight sequence of unoccupied squares terminated by an enemy occupied square, and capture the enemy queen or baby by replacement.

In Figure 3, the ivory queen kills (captures by replacement) the cigar baby. 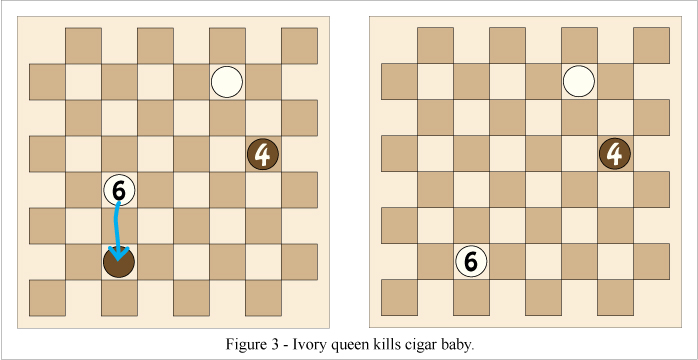 NON-CAPTURING QUEEN MOVES - When not capturing, a queen moves any distance in any one direction, exactly like a Chess queen, except it leaves its bottom checker behind on the originating square, reducing the stack height by one.  The queen monkey has thus given birth to a baby monkey.

In Figure 4, the ivory queen makes a non-capturing move leaving an ivory baby behind on the originating square and shortening the queen's height from five checkers to four. 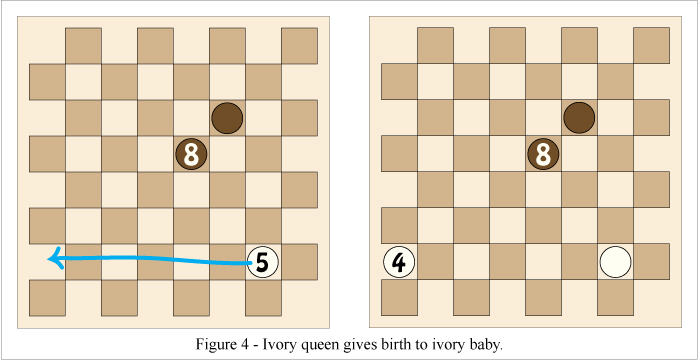 NOTE: A queen may not give birth to its own baby and kill an enemy baby in the same move.

NOTE: A queen of height two may not make a non-capturing move.

CAPTURING BABY MOVES - A monkey baby, like a monkey queen, captures exactly like a Chess queen.  Slide the baby (singleton) in any direction along a straight sequence of unoccupied squares terminated by an enemy occupied square, and capture the enemy queen or baby by replacement.

In Figure 5, the ivory baby kills the cigar baby. 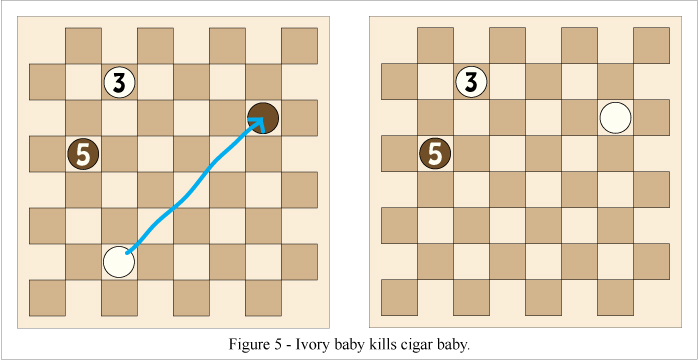 NON-CAPTURING BABY MOVES - When not capturing, a baby must move toward the enemy queen in the following sense:  The straight line distance between your baby and the enemy queen must be shortened by your move. 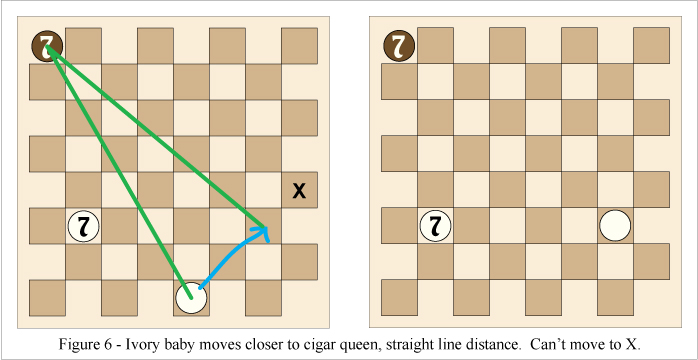 NOTE: There's no requirement to make a kill in Monkey Queen.


OBJECT OF THE GAME

To win you must either:
1. Kill the enemy queen or
2. Deprive your opponent of legal moves by leaving him with
a queen of height two, no babies, and nothing within line of
sight for said queen to kill.

Figure 7 comes from an actual playing.  It's Cigar's turn to move.  He's already lost the game because anywhere he moves, Ivory will kill the cigar queen on the following turn. 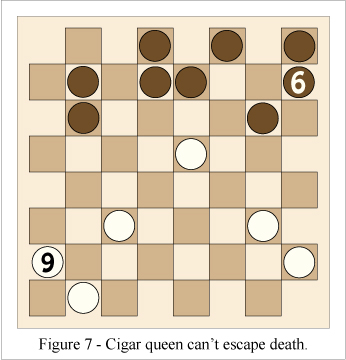 In Figure 8, it's Ivory's turn to move.  He's been left with a queen of height two, no babies, and nothing within line of site for his queen to kill.  Therefore Ivory is unable to move and has lost the game. 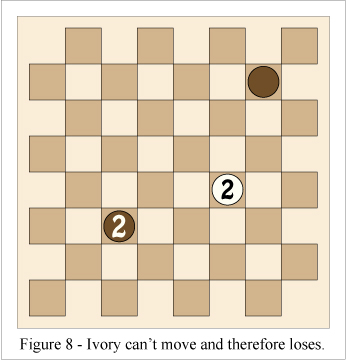 In Figure 9, Ivory must make his only available move, killing the cigar baby.  Ivory then loses on the following turn. 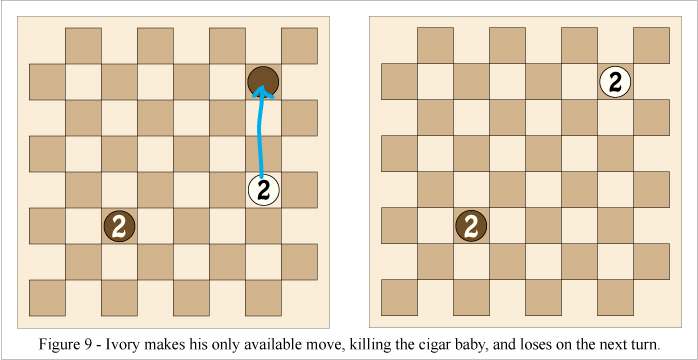 Feel free to publish this rule sheet, and to program the game of Monkey Queen for online or offline play.  No licensing fee or royalties are expected.  However please don’t change the name or the rules, and please attribute the game to me, Mark Steere.  My other games can be found at Mark Steere Games.